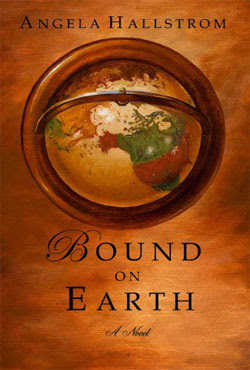 “In this novel, Angela Hallstrom demonstrates an admirable mastery of the art of fiction. In essence, it is the history of an extended Mormon family. Composed of vignettes–some of which have been published as stories–the novel advances from the present into the future, retreats momentarily to the past, or works laterally to include nearly simultaneous episodes. The point of view shifts deftly among a widowed grandmother, her son and daughter-in-law, their three daughters and their husbands. The style is strong and functional, unerring in its cadence and nicely balanced between the formal and the colloquial.

“The subtle background to this novel is the Mormon world view, established without preaching or assumptions of superiority. But it presents a far from idealized vision of reality. By moments the members of this extended family writhe with conflict, tension, depression, self-pity, and misbehavior. The attempts of the strong willed mother to guide and intervene often disrupt rather than heal. Her husband nearly succumbs to the veiled allurement of a seductive sister in their ward. A teen aged daughter conceives a baby out of wedlock. Another daughter is distraught by the birth of a fourth son, deeply disappointed that she has not at last borne a daughter. Yet another daughter marries–and determines to stay with–a bi-polar husband who periodically lapses into abuse. Yet ultimately their underlying bond with one another–their willingness to affirm whoever claims a place among them–triumphs. Though bound on earth, this is a family that will endure in eternity.

“If there’s a lesson to be learned from this novel, it’s that the pain and endurance required to create a family are worth it. In the final vignette, the dying matriarch of the family attends the celebration of the wedding anniversary of her son and daughter-in-law. She is greatly comforted just to be there, watching while “wives turn to husbands, fathers to children, and life keeps spinning forward, loose and free as a ribbon off a spool.” In heaven, she concludes, “there will be children there, and music, and cake, and husbands and wives and daughters and sons.” That is a picture of eternity that she can accept. —Levi Peterson, author of The Backslider and editor of Dialogue magazine

7 thoughts on “Bound on Earth by Angela Hallstrom”