Ghost of a Chance by Kerri Blair 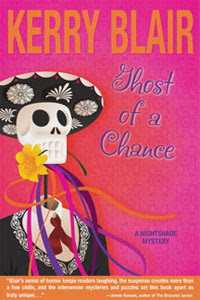 True love is like a ghost. Many people believe in both, but few find either.

Samantha Shade has been hired to find out if there is something more than rats and feral cats haunting the crumbling San Rafael Mission, home of Father Rodriguez’s impoverished flock. But soon, the donut-addicted rookie private investigator is sidetracked by a series of murders occurring within the parish — and by the bookish, yet attractive, police detective leading the investigation.

Several young men are found executed in the same gruesome manner — and each is discovered with a marigold between his lips. The clues all seem to lead to someone at the San Rafael Mission. Who could be responsible? Soon Samantha comes all too close to the answer as she is led through the crypts below San Rafael’s cemetery on a journey that could only end on the Day of the Dead. 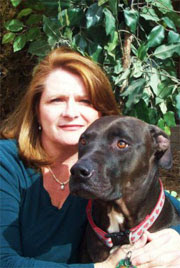 Kerry Blair wrote her first novel when she was eight years old and promised herself that she would do it again when she “grew up.” She makes her home in West Jordan, Utah, with her husband, Gary, and four children.

Kerry says, “I’d always said I wanted to be an author when I grew up—and forty is pretty darn grown up by anybody’s standards. The Heart Has Its Reasons was released in 1999 and I’ve since published seven-and-a-half more books (one was a collaboration) and been included in a compilation of inspirational essays for mothers. I’ve edged from LDS romance into romantic mystery into murder-mystery-with-romantic-overtones into romantic comedy into the new Nightshade series – books one reviewer said is what you’d expect ‘if you watched Buffy join CSI on the Romance Channel.'” 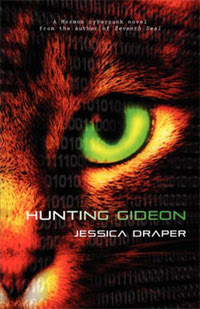 Tracking hackers and crackers for the FBI’s National Infrastructure Protection Center looks like a vivid video game to an outsider, but the outcome of the play is deadly serious. Through her online feline avatar, Sekhmet, Sue Anne Jones stalks the V-Net, the ultimate virtual-reality interface, in pursuit of evil in all its online forms. Her partner, ex-cracker Loren Hunter, provides cynical commentary along with his expertise in the V-Net’s shadier alleys.

Their days of busting routine identity thieves and insidious corporate spies end when they get a new assignment: Hunt down a cyber-terrorist calling himself Gideon, who has infiltrated the financial system, rerouted supply lines, and murdered the supervisor of an automated factory. Now Gideon is sending taunting messages, quoting scripture, and warning Sue that she must join his crusade or suffer—along with the rest of the virtual world—when he takes total control of the V-Net. 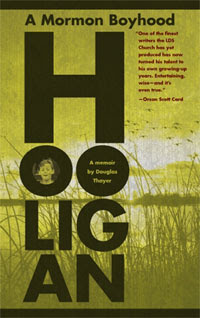 In the days before sunscreen, soccer practice, MTV, and Amber Alerts, boys roamed freely in the American West—fishing, hunting, hiking, pausing to skinny-dip in river or pond. Douglas Thayer was such a boy, and in this poignant, often humorous memoir, he depicts his Utah Valley boyhood during the Great Depression and World War II.

Known in some circles as a Mormon Hemingway, Thayer has created a richly detailed work that shares cultural DNA with Frank McCourt’s Angela’s Ashes, Mark Twain’s The Adventures of Huckleberry Finn, and William Golding’s Lord of the Flies. His narrative at once prosaic and poetic, Thayer captures nostalgia for a simpler time, along with boyhood’s universal yearnings, pleasures, and mysteries.

Douglas Thayer teaches English at Brigham Young University, where he has served as director of composition, chair of creative writing, associate department chair, and associate dean. He has received various awards for his fiction, including the Karl G. Maeser Creative Arts Award. He is the author of the novels Summer Fire and The Conversion of Jeff Williams and two collections of short stories, Mr. Wahlquist in Yellowstone and Under the Cottonwoods and Other Mormon Stories, and he has been published in Colorado Quarterly, Dialogue, Prairie Schooner, and elsewhere.