Scotlyn, Knightess of the Dragon by Dierdra Eden Coppel 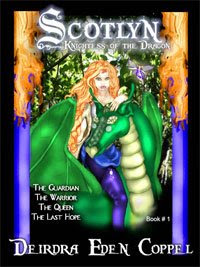 This is a historical fantasy about the adventures of a young girl in the final years of the 12th Century England and the challenges that fight her dreams. With unforgettable characters, the story delivers a rare combination of romance and mystery, humor and inspiration.

Scotlyn’s story weaves through the crusades and takes her into womanhood. It tells of young men who dreamed of becoming knights, the many who returned heroes and those left on the battlefield. Certain knighthoods, like the Order of the Dragon of the Count of Foix, inducted women to the call of knights. Scotlyn was numbered among those who answered the call and defied impossible odds to become a revered lady knight.

Her powerful tale teaches the importance of dreaming, courage in the face of death, the strength of character and the rewards of persistence. 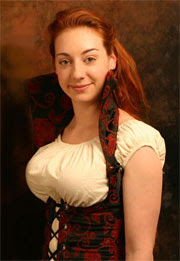 Deirdra Eden Coppel has been writing stories, poems and lyrics from the age of four. As a child, she was also fascinated with mythology and historical customs and sports. She has studied weaponry and frequently attends and competes in sword fighting tournaments. Combining her love of literature, theology, mythology and history, her historical fantasy stories have captivated audiences of all ages. Readers have applauded the books’ high values, morals and admirable characters. Deirdra loves sharing her talents and will continue to create products that will inspire others.

Don’t You Marry the Mormon Boys by Janet Kay Jensen 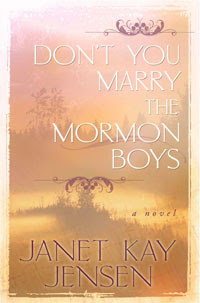 When Andy McBride met Louisa Martin, he knew he had found the girl for him. There was only one problem: polygamy – a lifestyle that Louisa could not escape and Andy would not embrace.

As medical students at the University of Utah, Andy and Louisa fall in love – but can a mainstream Mormon and a Fundamental polygamist overcome the cultural barriers between them? Both realize that their choices will not only affect their own lives, but will also have an impact on their family, friends, and even their communities. Fearing that the sacrifices required of them would be too great, they go their separate ways.

Yet for Andy in Kentucky and Louisa in Utah, life does not go as they’d planned. While Andy is serving as a country doctor and trying to bury his pain, Louisa is coming to terms with the fact that all is not as perfect in her tight-knit community as she’d believed. As doctors, each will have to choose between keeping the peace in their communities or doing what they know is right. And someday, both will have to face their past and decide if they can make the sacrifice to be together.

Set in the red hills of southern Utah, the cosmopolitan center of Salt Lake City, the Smoky Mountains of Kentucky, and the lake-studded country of Finland, Don’t You Marry the Mormon Boys is the heartfelt and engaging story about the power of love and acceptance in an ever-changing and often surprising world. 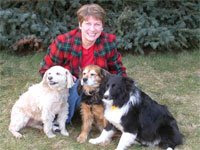 Janet Kay Jensen is author of Don’t You Marry the Mormon Boys (Cedar Fort, 2007), named a finalist by USA Best Books 2007. She is co-author of The Book Lover’s Cookbook: Recipes Inspired by Celebrated Works of Literature, and the Passages That Feature Them (Wenger & Jensen, Ballantine Books, 2003). Her work also appears in Writing Secrets, Everton’s Family History Magazine, ByLine, Meridian, and The Magic of Stories. She holds degrees in Speech-Language Pathology from Utah State University and Northwestern University and is an adult literacy tutor. She is a member of Author’s Guild and has won numerous awards from the League of Utah Writers. She and her husband are the parents of three college student sons and have recently become grandparents. Visit her web page and her blog and watch a video preview of Don’t You Marry the Mormon Boys

On the Road to Heaven by Coke Newell 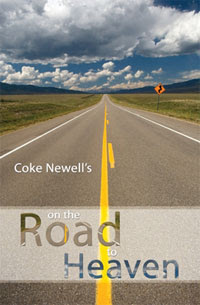 An autobiographical novel by Coke Newell

From the author of Latter Days: A Guided Tour Through Six Billion Years of Mormonism comes this exuberant and groundbreaking autobiographical novel about the modern Mormon convert experience. Revealing the author’s hard-won path to meaning, faith, and forgiveness, On the Road to Heaven is a love story about a girl and a guy and their search for heaven—a lotta love, a little heaven, and one heck of a ride in between.

In a style reminiscent of and offering homage to Jack Kerouac, On the Road to Heaven traces an LSD-to-LDS pilgrimage across the geographic and cultural landscape of two continents in the late twentieth century. From the 1970s hippie heyday of the Colorado mountains to the coca fields of Colombia, it’s a journey through Thoreau ascetics, Ram Dass Taoism, and Edward Abbey monkey-wrenching to the mission fields of one of the world’s fastest-growing—and most trenchantly conservative—religions. 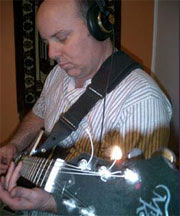 Of twelve million Mormons worldwide, more than seventy percent are first-generation converts, including Coke Newell. A former tree-hugging, Zen-spouting, vegetarian Colorado mountain hippie, the author later worked for more than a decade as an LDS Church media relations officer at world headquarters in Salt Lake City. His byline or citation on the topic of Mormonism has appeared in mmore than a thousand North American periodicals, including the Wall Street Journal, USA Today, and the Los Angeles Times. Newell’s award-winning journalism and fiction have appeared in such publications as Columbia Journalism Review, Grit, Ensign, True West, Irreantum, and the Rocky Mountain News. He lives with his wife and children in rural northern Utah.