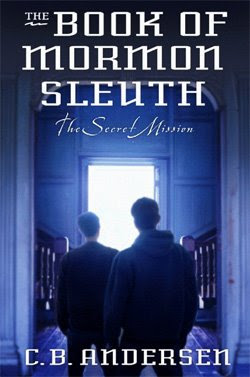 Why did a first- edition Book of Mormon wind up in an old Catholic mission in San Diego? What clues does it contain to a mysterious past? And why is Dr. Anthony interested?

Brandon Andrews is having nightmares. Okay, perhaps it would be more accurate to say that Brandon Andrews is having a nightmare, over and over and over again. A chance encounter in a grocery store with a crotchety old man has been taking over Brandon’s nighttime musings. In this dream, the man from the grocery store consistently morphs into Mr. Omni, a man whom Brandon sees as a nemesis from his past.

As Brandon strives to overcome his fears and the sleep deprivation that they are causing, Mr. Andrews calmly announces to the family that the time has come to take their next family vacation. In most families this would be a cause of great excitement and anticipation. Unfortunately, as Brandon says, “My dad is awesome. That said, I know of two areas where he is totally lacking. The first is his ability to show compassion when I am in distress (which is why I hadn’t yet bothered to tell him about my nightmares). The second is that he has absolutely no idea how to do a normal family vacation.”

As most of his children watch him in dread-filled silence, Mr. Andrews explains that he has received a phone call from Mr. Omni. He has requested that the entire family come to stay with him at his cottage for a week in Southern California. As the family will later learn, Mr. Omni has been excavating some ruins and has found an old copy of the Book of Mormon and an old journal that belonged to the catholic priest who lived there in the 1800’s. The priest had received the Book of Mormon as a gift from a member of the Mormon Battalion. These things become the opening clues in a story that will carry the Andrews family in general, Brandon and his brother, Jeff, in particular, through yet another vacation filled with mystery and mayhem.

As the Andrews family seeks out information on the Mormon Battalion, Brandon and Jeff spot the evil Dr. Anthony. They give chase and, for their efforts, are locked in a small filing room at the Mormon Battalion Visitor’s Center. It doesn’t take long for Brandon to connect Dr. Anthony with Mr. Omni, a fact that only increases his horror at being on this vacation.