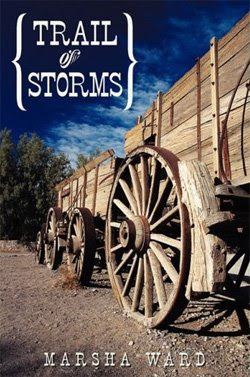 Series: The Man from Shenandoah, Ride to Raton

Jessie Bingham put heartbreak away to tend to her sister’s needs, but when she settled for second best in love, she didn’t foresee that James Owen would come back into her life.

The aftermath of the Civil War creates cruel circumstances for the Bingham family. A brutal attack on Jessie’s sister, Hannah Fletcher, drives the extended family to flee to the West. They are soon joined by Heppie Bingham’s beau George and his brother, Ned, who bring news that the Binghams are being pursued by cronies of Hannah’s attacker. Even after they fight off that onslaught, poverty, bad weather, and Hannah’s frightful secret plague their journey.

Nursing her battered heart when she hears James Owen took a wife, Jessie accepts Ned’s offer of marriage. But a stop on the trail holds surprises that launch Jessie into a tangle of bewildering values and emotions, and high adventure.

6 thoughts on “Trail of Storms by Marsha Ward”