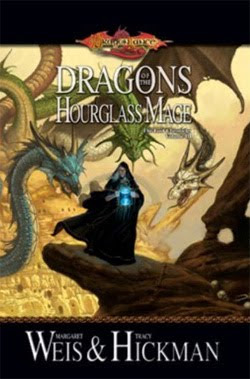 Title: Dragons of the the Hourglass Mage (The Lost Chronicles, Vol 3)

Publisher: Wizards of the Coast

Between Chronicles and Legends, what made Raistlin aspire to godhood?

Raistlin Majere has become a Black Robe wizard and travels to Neraka, the lord city of the Dark Queen, ostensibly to work for her, though in reality he means to further his own quest for power. But Takhisis finds out that the dragon orb has entered her city and sends her draconians to find and destroy the wizard who has it in his possession. Before her agents can strike, though, Raistlin finds out that Takhisis means to take control of all wizardly magic. She has ordered Kitiara to set a trap for the Gods of Magic on the Night of the Eye, when all the high-ranking wizards will be in Neraka to celebrate.

As the forces of light, with help from the good dragons, are turning the tide of battle, Raistlin is forced to flee, for his foes are closing in on him. As the Dragon Highlords vie for the Crown of Power in the Temple of the Dark Queen, Raistlin Majere wages his own desperate battle against Takhisis in the dungeons below and meets again the brother he betrayed. The fate of the world hangs in the balance.