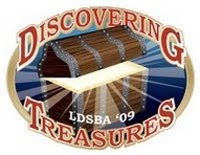 The LDS Booksellers Convention has once again come to a close. I experienced a variety of feelings during this week. While it was fun to see the new things coming out, network with old friends, meet a few new ones, it was also very sad to see how much the convention has changed over the past few years.

My first year at the convention, it was one huge event! We were in one of the bigger convention halls at the South Towne Expo—and it was crowded. There were vendors everywhere and I heard not all that wanted in were able to get a booth. (That may or may not be true, but every spot was filled.)

The aisles were nearly bursting with book buyers. All the Deseret Book managers were there. Buyers came from all across the U.S., Canada, and England. Sometimes the aisles were so crowded with people that you couldn’t get through to where you wanted to go. And the noise! It was definitely noisy.

A few years later, we moved to a smaller convention hall with fewer booths, but it was still nice. Also, Deseret Book stopped sending the individual bookstore managers, sending only the corporate buyers. We saw a big drop in attendees then.

Last year, it was even smaller with the loss of some key companies who had closed their doors.

And this year. This year? 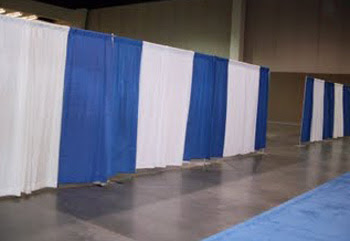 See that? That’s a curtain that partitioned off probably a full third of the hall at the back. I’ve never seen that before!

While there were several new vendors there, a lot of the old-timers were missing. It also seemed that most of the booths were smaller this year than ever before. Granite had a teeny booth. Cedar Fort and Deseret Book both had smaller booths. Deseret Book only had one author signing station this year. Covenant was about the same size as last year (I think) but it has decreased since I first attended. WindRiver was smaller. Millennial Press was smaller and shared their booth with One Associated.

Attendance by buyers was lower than last year. I didn’t think it was possible. I strolled the aisles at my leisure, never once having to stand in a line at any booth. I could hear every thing that was said to me, in normal speaking voices.

It was just sad.

Oh, and the LDSBA itself usually has wonderful decorations out in the foyer. Not this year. Nothing. Only this booth. 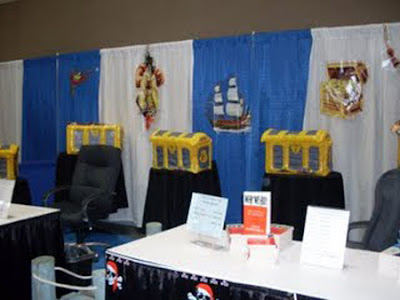 Of course, I don’t blame them for not having lavish decorations. With this kind of turn-out, I wouldn’t have decorated either.

I don’t know if this is a reflection of the economy or the state of the LDS merchandising industry or a combination of both or what, but it is sad to see.

I really, really hope something breathes some new life into our convention before next summer.

4 thoughts on “The Incredibly Shrinking Convention”