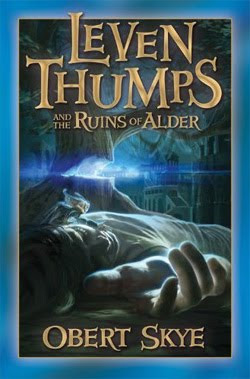 Title: Leven Thumps and the Ruins of Alder

Series: Leven Thumps and the Gateway to Foo

(v3), Leven Thumps and the Wrath of Ezra

“Do you think he’ll be able to do it?” Clover asked, worried.

In the fifth and final volume of the epic saga of Leven Thumps, all of Foo is rushing madly to exit the realm of dreams while Leven is headed in the opposite direction. Fate snatches him to the island of Alder, where he is poised to pass or fail the final test.

Meanwhile, in Reality, Ezra and Dennis are welcoming those flowing out of Foo but only so they can selfishly conquer them and gain control of both realms. Phoebe is loose, and it takes Geth getting ahold of her to begin to balance the emotions and passions of all that is crumbling.

And Winter? Well, Winter just might hold the answer to everything.

Ride with Leven and Clover as they travel through the ruins of Alder hoping he has what it takes to save all mankind and restore the power of dreams.