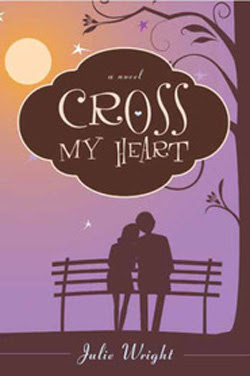 The first man is Geoffrey—in Boston, which is Jillian’s hometown. Hazel-eyed Geoffrey, the brilliant ad exec who Jillian would’ve married if he hadn’t stolen some of her best work (and gotten her promotion as a result).

The second man is Jack in Los Angeles. Insecure Jack, who signs Jillian up for a love study at a local university “just for fun” but secretly intends to find out if she still loves Geoffrey. Flaky Jack, who splits as soon as her brain neurons fire an emphatic yes.

The third man is Nathan on the airplane from L.A. to Boston, where Jillian’s boss has ordered her to investigate the underhanded dealings of a competing agency (and where Jillian’s crazy parents still live). Nathan, the electric-blue-eyed dentist who hates the advertising industry because his ex-girlfriend, Nicole, recently dumped him for some hotshot ad exec.

Head spinning yet? Just wait until Nathan’s nemesis, Nicole’s fiancé, and Jillian’s target turn out to be the same guy: Geoffrey. Yes, that Geoffrey. Forget about love triangles— this is a full-blown love quadrangle that quickly becomes a high-stakes game with savvy players, snappy dialogue, and a plot that won’t stop twisting . . . until another love study delivers surprising results.