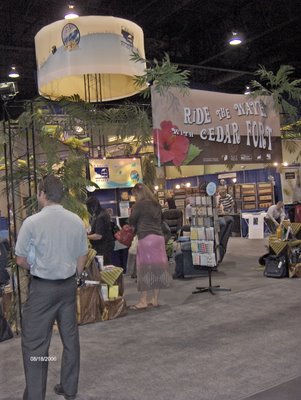 This is one end of Cedar Fort’s booth. They had a 10 booth space. That round thing above the middle of their booth has all their imprint/company logos on it, riding the top of that blue wave. I think it may have rotated. It was kind of cool, but some of the logos were too small and they were hard to read even when you were right up close. Which is too bad.

Note to CFI: next time, make your logos bigger and bolder.

You can barely see it in this photo–and I’m hoping someone will send me another photo of this booth from inside it–but they had plastic walls around their booth that had cascading water coming down the sides. That was kind of cool.

I think they were really brave to do the water thing. I mean, if one of the tubes or pipes sprung a leak, it would have sprayed all over the conventioneers and ruined a lot of CFI product, and possibly some product in the neighboring booths. However, as far as I know, it worked for them.

(We thought about having water in our booth, but decided against it due to the disaster potential.)

CFI also had these really cute plastic blow-up chairs with polka dots all over them. They looked nice and fun, but they were so low to the ground that I wouldn’t have dared try to sit in them. It would have taken a crane to get me back up. I think a lot of people may have felt the same way, because out of the 200 times I walked past them, I never once saw anyone sitting in them.

Overall, I think CFI had an okay booth display, but it wasn’t nearly as cool as their jungle themed one last year. That one was ULTRA-COOL! They had camoflage netting all over it. They were one of my favorites last year, but I don’t have any photos of it. Sorry.