Revenge of the Cheerleaders by Janette Rallison 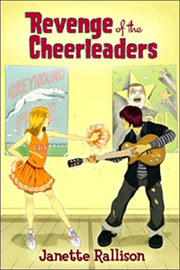 Chelsea’s school year has taken a turn for the worse. After being dumped by her boyfriend and humiliated at the pep assembly by her younger sister’s boyfriend, Rick, she’s just concentrating on avoiding any other major embarrassments.

That’s when Rick and his band debut their new album, complete with a whole set of songs bashing cheerleaders. Chelsea’s humiliation has reached a whole new level now that everyone is walking down the halls singing the words to “Dangerously Blonde.”

It’s time to make Rick pay. All he wants is to win the High School Idol audition, so he can be on his way to rock star fame and fortune. But with the help of her best friends, Aubrie and Samantha, Chelsea is going to steal his victory right out from under him.

The characters from All’s Fair in Love, War and High School are back, only this time it’s payback. 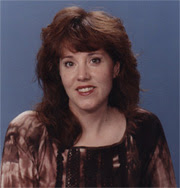 Janette wrote her first story when she was six years old. (“Wrote,” in this case, meaning she bugged her parents until they agreed to write down what she dictated.) It was several pages of notebook paper stapled together. Over the years she continued to write longer and longer stories, some of which received glowing reviews from her fifth grade teacher.

Janette first became serious about publishing as a young mother when she rediscovered that writing was much more fun than cleaning the house. In fact, she attributes her long and successful writing career to complete avoidance of housework.

Over the years, and countless dirty fridges later, she has published Playing the Field; All’s Fair in Love, War, and High School; Life, Love, and the Pursuit of Free Throws; Fame Glory, and Other Things on My To Do List; It’s a Mall World After All, How To Take the Ex Out Of Ex-boyfriend; and Revenge of the Cheerleaders.

She has five children who keep her well supplied with plot ideas, sometimes even making cameo appearances in her novels.

Dead on Arrival by Jeff Savage 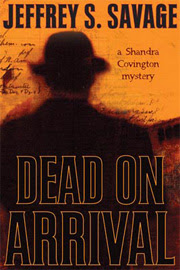 Curiosity can be a curse, and just like the proverbial cat, feisty Shandra Covington could soon end up dead.

As a newspaper reporter, Shandra meets unusual people every day. But Pinky Templeton is the first one who has claimed, quite vocally, to be dead! She would just ignore him as another nut case, except life-threatening events are happening to those close to her. And Pinky seems to be involved–although the official records show he did die in 1957. Now that he’s gone and died again, Shandra feels she must find out the truth–even if her friend, police officer Bobby Richter, doesn’t want to help. After all, how many times can one man die? With Pinky, it’s hard to tell.

Feel the rain pounding on your face as you shiver along with the interesting, and often funny, characters in this rollercoaster of a mystery that will leave you wanting another ride.

Jeffrey Savage is the author of Cutting Edge, Into the Fire, and the Shandra Covington Mystery Series. Upcoming novels include Farworld–a national YA fantasy series with Shadow Mountain, Dark Memories, the first mainstream Mormon horror novel, and the next Shandra book. Jeff loves doing anything with his family, anything Disney, medium well steaks, and the Oakland Raiders. He is firmly against prologues and SASEs.

My Mom’s a Mortician by Patricia Wiles 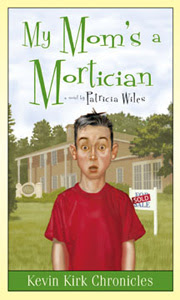 Poor Kevin. It’s hard enough to move to a new house, let alone to a funeral home. The thought of sleeping in the same house with dead bodies doesn’t thrill Kevin. But when one of the “deceased” starts giving him advice, Kevin really has his hands full. And then there’s the family secret: Kevin’s parents used to be Mormons until a tragedy drove them away from God. What will Kevin do? Find out in this exciting new series. 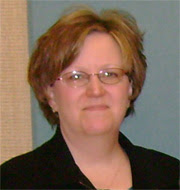 Patricia and her husband have two daughters and a son–all of whom have left the nest. Their cat, however, is a moocher who refuses to move out and get his own place.

Click here to learn how you can win a copy of one of our sponsoring books.

Click here for details on becoming a sponsor of this LDS Publisher blog.

One thought on “December 2007 Sponsors”