All of these photos were sent to me from Sandra, who attended the convention on Thursday. She also felt it was small and sad. She said she saw everything in just a couple of hours. Thanks for the photos. 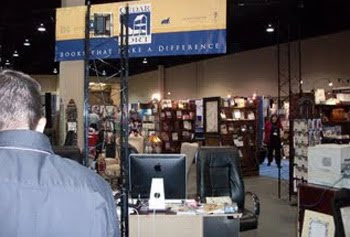 Cedar Fort’s booth tied with Deseret Book for having the largest floor space. I think they were this same size last year, but not sure. They weren’t having any author signings while I was there, but I think they did have a few scheduled. 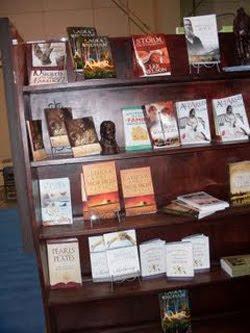 This is one display of new Cedar Fort books. I think most of these have already been released. They had another bank of books this size that held new releases, as well. Some of them looked interesting. I would have been tempted to swipe a few but 1) they didn’t have any that were just sitting around asking to be swiped, and 2) Lyle Mortimer was sitting right there giving me the evil eyeball. (Not really “evil”—just suspicious. I think it was the peacock feathers. I was molting all over his booth.)

CFI has really been picking up a lot of authors lately. It’s a smart move on their part, if they can maintain the schedule. 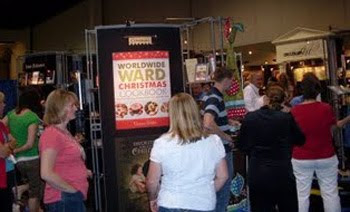 Covenant’s booth was smaller than last year, again, I think. They had the most traffic while I was there. They also had two banks of New Releases. Some of these are already out and others are coming out over the next couple of months. 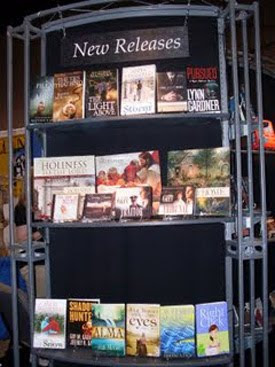 I’m particularly interested in seeing the book on the bottom right shelf. (Click here for close up.) I really don’t remember posing for that shot. Maybe I should sue them for endorsement infringements? 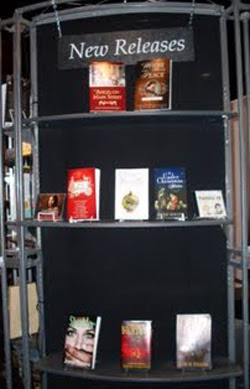 Another release I’m anticipating is the one on the bottom left of this bank. (Click here) While I think Jennie Hansen is a fine writer, I don’t personally groove on historicals or westerns. This is a current day suspense, which I do like.

I would have swiped some of these books too, but they weren’t real. They were old books with a new cover wrap for display purposes only. Bummer. 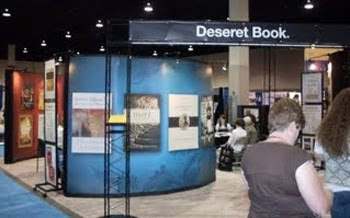 Deseret Book wins the “are you kidding me?” award. I was absolutely stunned by the size their booth wasn’t. They are usually THE big spot each year, sometimes having more than one booth area. This year, while still the biggest (w/CFI), they were just so much smaller than before. 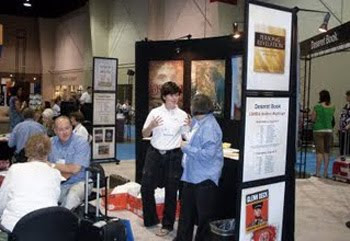 From another angle. And don’t assume that it extends much beyond the picture because it doesn’t. They only had one signing station this year. So disappointing to see that. But totally understandable. Why should they put out a bunch of money for a huge booth, when reseller attendance is at an all-time low? 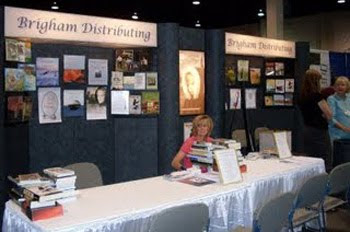 The last photos I have here are of Brigham Distributing. Brigham doesn’t publish but they distribute for small presses, like Leatherwood Press and the new Valor Publishing. They also carrying close-out titles for Spring Creek and Rosehaven Publishing, both companies are pretty much out of business now. I’ve been really impressed with Brigham Distribution over the years. I very much admire Barry Reeder. 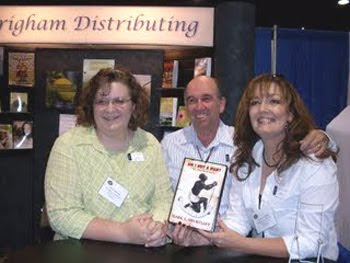 This is Valor Publishing holding a mock-up of their first title, Am I Not a Man? The Dred Scott Story by Mark L. Shurtleff, scheduled to come out this fall. Tristi Pinkston (left) is acquisitions editor, BJ Rowley (center) is business manager, and Candace Salima (right) is president.

I did not see WiDo Publishing there (which I’ve heard pronounced as both “wee-doo” and “wid-doh”), although I heard rumors that a representative was strolling around there one day. I also don’t know if they’re self-distributing, or if they’re going through another distributor.

That wraps it up for now. If you have more photos, corrections, comments, you know how to get them to me.