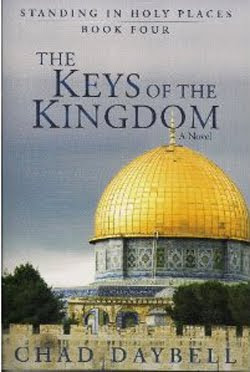 Title: The Keys of the Kingdom (Standing in Holy Places, Vol. 4)

As New Jerusalem becomes established and the Second Coming seems imminent, several crucial events remain to be completed before the Millennium is ushered in. The two apostles called by the LDS prophet have arrived in Jerusalem, where they must defend the city against the approaching Coalition armies.

Meanwhile, many Saints are returning to their hometowns following World War III in an effort to establish Cities of Light across the American continent. However, the seven plagues prophesied in the Book of Revelation have begun, signaling the beginning of a showdown between good and evil that threatens to engulf the world.

One thought on “The Keys of the Kingdom by Chad Daybell”