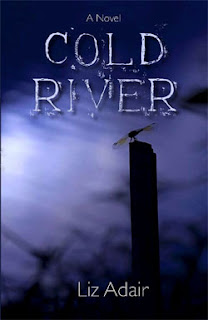 Mandy Steenburg thinks her doctorate in education has prepared her to run any school district—until she tangles with the moonshine-making, coon-dog-owning denizens of a tiny district in Pacific Northwest timber country.

She’s determined to make a difference, but the local populace still looks to the former superintendent for leadership. When Mandy lands in the middle of an old feud and someone keeps trying to kill her, instinct tells her to run. And though she has to literally swim through perilous waters, she finds a reason to stay and chance the odds. 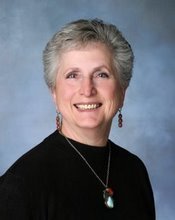 Books by Liz Adair include the Spider Latham Mystery Series, consisting of The Lodger, After Goliath and Snakewater Affair and Mist of Quarry Harbor. Liz is also the co-editor (with her daughters Terry Gifford and Ruth Lavine) of Lucy Shook’s Letters from Afghanistan. Her book Counting the Cost, a novel based on family history, won the 2009 Whitney Award and was a finalist for the Willa Award and Arizona Publisher Association’s Glyph Award. Liz is active in American Night Writers Association and LDStorymakers and belongs to the Skagit Valley Writer’s League. Cold River is Liz’s eighth book.

Visit Liz at  her blog, sezlizadair.blogspot.com. 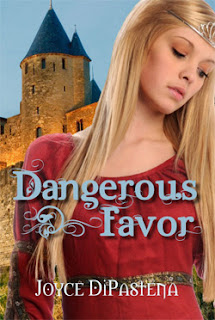 Her father has been accused of stealing from the king, an allegation that has reduced her family to poverty. She has one chance to find and marry a man who can help her prove her father’s innocence. Lord Therri, heir to a rich barony, has the wealth and connections Mathilde needs to delve into the mysteries of her father’s past. Furthermore, Therri embodies all her romantic dreams.

Etienne, the younger son of a disgraced family, has neither wealth nor connections, but is smitten with Mathilde at a glance. She finds the knight intriguing, but believes he is only out to seduce her. While she seeks for a way to win Therri’s attention, Etienne tricks her into granting him her favor, an embroidered white ribbon, for a tournament, setting in motion a dangerous chain reaction of events. Can Etienne save Mathilde from a nightmare from her past and prove himself the true hero of her dreams? 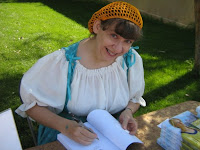 Joyce DiPastena: Joyce fell in love with the Middle Ages when she first read Thomas B. Costain’s The Conquering Family in high school. She is a graduate of the University of Arizona with a degree specializing in medieval history.Joyce lives in Arizona with her two cats, Clio and Glinka Rimsky-Korsokov. Dangerous Favor is her third novel.

Visit Joyce at her website, www.joyce-dipastena.com,  and her blog, jdp-news.blogspot.com.

No Escape by Anna Jones Buttimore 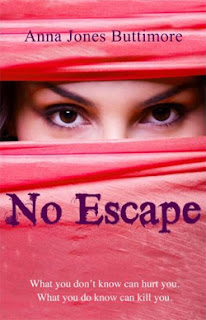 Hoping to escape his grief over the loss of his beautiful wife Heather, Michael Boyd leaves behind his New York precinct and his gun to embark on a police-exchange program. As a police officer in rural North Wales, he is struck by the tenacity and resourcefulness of Catrin Pritchard, a single mother with a frightening past. It appears that her brother Seth is involved in drug dealing and something much bigger.

After Seth’s sudden death, Michael is forced to overcome Catrin’s hostility and her wariness to trust anyone, especially a man. Michael vows to protect her and her young daughter from the unknown assailants trying to silence them, and he and Catrin must decipher the meaning of the mysterious code etched on the back of a valuable oil painting.

As the threats and terror escalate, Michael finds himself betrayed by those closest to him even the Heather he remembers and realizes Catrin was right not to trust anyone. But when they find themselves trapped in an underground cave with the tide rising, one of those people is their only hope for escape. 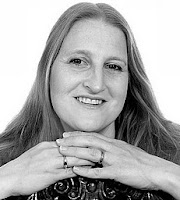 Anna Jones Buttimore was born and brought up in the South of England, but educated in Wales where she lived for the next 20 years. She is now living back in the village where she grew up with her daughters Gwenllian, Angharad and Ceridwen, and husband Roderic. Anna serves as Public Affairs Specialist in her ward.

Anna works part time from home for a legal charity, and has always loved writing in her spare time. She is the author of  Haven and A World Away under the name Anna Jones, and  Easterfield and Honeymoon Heist. Anna enjoys rock music, her computer, cross-stitch, swimming, and science fiction. She is determined to get into scrapbooking and family history one day when she can find the time. No Escape is her fifth novel. 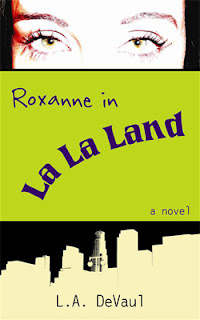 “Love and success, isn’t that what every girl wants? At eighteen, I moved to Southern California, hoping to find it. And I did, eventually…but nothing like I expected.”


New to Los Angeles, Roxanne Donally spends her days dressing indecent mannequins, and her nights drawing pictures of her cat, Danny Boy. Definitely the wrong way to find stardom, or Prince Charming either, for that matter . . . .

“But forget love, I am pursuing my dream to become a famous movie star. I moved to L.A. to be successful, and be successful I will. I m just not getting any parts yet. Which totally sucks. Success is the only thing I really want in life. Besides love. Success and love. Sigh…” 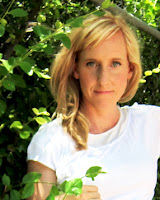 L.A. DeVaul: I have spent my life wondering where I belonged. When I write and film my shows, I no longer wonder.

Most of my stories, long or short, involve quirky characters in bizarre situations. Pretending to be someone else is a habit I can’t break.

When I was eight-years-old and assigned to make lunch for my siblings, I couldn’t do it without a pad of paper, chewing gum, and a Brooklyn accent. “Whadya want?” Chomp. Chomp. That obsession has never stopped. Writing and filming The L.A. DeVaul Show allows me to give stories and lives to all the fake people living in my head. I guess it’s true that many of us never grow up, we just get older.

Secrets After Dark by Marie Higgins Hannah Forester is determined to find her father’s killer, but is shocked to discover the one man who can help her is not completely human. Forced to work with the mysterious Morgan Thornton to break the curse that turns him into a wolf whenever he desires a woman, Hannah stumbles across dangerous secrets surrounding the manor and Morgan’s family. In search for the truth, Hannah finds not only her father’s killer, but also a hidden strength and the only man she could ever give her heart to.

Morgan Thornton is determined to protect Hannah from his family secrets, but he can’t stop wanting to hold her and become a man again instead of the beast the witch’s curse turned him into. Now the witch wants Hannah because of what she knows, and Morgan will do anything to save her, even if it means destroying the witch and condemning himself to live with the curse forever. Morgan discovers more than just the answers to his family’s secrets … he finds true love. 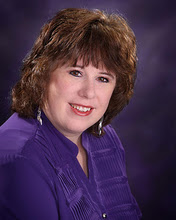 Marie Higgins is a multi-published author of romance; from refined bad-boy heroes who makes your heart melt to the feisty heroines who somehow manage to love them regardless of their faults.

Since Marie Higgins was a little girl playing Barbies with her sister, Stacey, she has loved the adventure of making up romantic stories. Marie was only eighteen years old when she wrote her first skit, which won an award for Funniest Skit. A little later in life, after she’d married and had children, Marie wrote Church roadshows that were judged as Funniest and Best Written. From there, she branched out to write full-length novels based on her dreams. (Yes, she says, her dreams really are that silly)

Marie has been married for twenty-six years to a wonderful man. Together, they have three loving daughters and several beautiful grandchildren. Marie works full time for the state of Utah, where she has lived her entire life. Marie plans to keep writing, because the characters in her head won’t shut up. But her husband smiles and pretends this is normal. 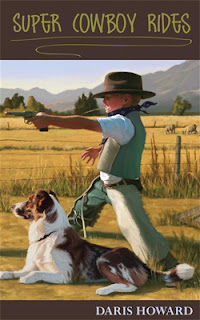 Want to build a box to capture wild cats that roam the farm? How about tips on catching a greased pig at the fair, or teaching a stubborn lamb to avoid being trampled by angry milk cows? From the first paragraph, when Tommy explains why a boy needs a dog for a pet instead of a cat, he wins us over with his down-to-earth and humorous view of the world.

But once Tommy starts school, things get complicated. He cannot learn to read. He gets put in the lowest reading group and told to stay in the back of the classroom coloring. He gets picked on by teachers and mocked by classmates.

And then tragedy strikes, and Tommy has a burden to carry beyond what any first-grader should have to face. In the process of dealing with his grief, Tommy learns the meaning of true friendship. 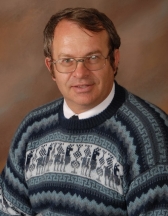 Daris Howard is an author and playwright who grew up on a farm in rural Idaho. Throughout his life he has associated with many colorful characters including cowboys, farmers, lumberjacks, truck drivers, factory workers, and others while working in these and other industries. He will jokingly say that his best job was working in a fast food establishment, because that was what gave him the motivation to attend college.

Daris and his wife, Donna, have ten children and were foster parents for several years. He has also worked in scouting and cub scouts, at one time having 18 boys in his scout troop. Daris is now a math professor and his classes are well known for the stories he tells to liven up discussion and to help bring across the points he is trying to teach. His plays, musicals, and books build on the characters of those he has associated with, along with his many experiences. He also writes a popular weekly newspaper column called “Life’s Outtakes” that are short stories from his life and the lives of those he has known. His scripts and books are much like his stories, full of humor and real life experiences.

To enter to win one of these books, use the form in the sidebar. One entry per person per month. NO PURCHASE NECESSARY. You must be 18 years or older to enter. Limited to U.S. residents. Deadline to enter: February 29, 2012, midnight, Mountain Time. VOID WHERE PROHIBITED BY LAW. CLICK HERE to read the Official Rules.