I was so busy fa-la-la-ing that I forgot to connect with potential sponsors for this month, so there are only three. But they are awesome! A big thank you to our Prize Sponsors! Please take a moment to learn more about this month’s wonderfully generous sponsors.

A Little Hair of the Dog by Jane McBride 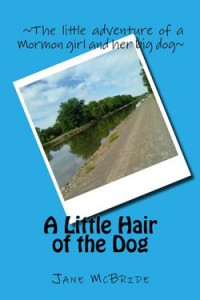 The little adventure of a Mormon girl and her big dog…

Ann Bixby was born and raised as an only child in a small village on the banks of the Erie Canal. When she was 15 years old, the unthinkable happened. Her mother died. Deciding that living in that town without his beloved wife was more than he could bear, Ann’s father moves his teen-aged daughter to Eastern Oregon.

When 27 year old Mormon Ann Bixby returns to the small town of her childhood after the death of her father, she has no idea that she is about to become a mother—to a 180 pound Great Dane—and a lifeline to a reclusive and bitter young man. 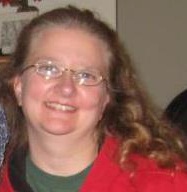 Jane McBride was born in Rochester, New York and grew up in a small town called Medina in Western New York in an old farm house. The house, barn and yard allowed for a constant flow and supply of all kinds of different animals who were cherished and loved to the elderly ends of their long lives. She joined The Church of Jesus Christ of Latter-day Saints in 1986 and served a mission to Oregon from 1990-1991. She met her husband during that time and they now live in Taylorsville, UT with their two little boys and a whole bunch of animals. She has always had a thing for writing and A Little Hair of the Dog is her first novel. 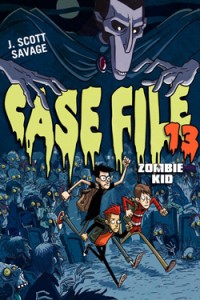 You hold in your hands a very dangerous record.

I have collected every side of the story and every piece of evidence on case number 13. Now, in this file, you will find all you need to follow the dark adventures of Nick, Carter, and Angelo, three boys who possess an unhealthy obsession with monsters, in a town so grisly, so horrific—

Whoa, whoa, whoa. You’re telling it all wrong, dude. You make it sound like it’s a scary story.

Ahem. Well, Nick, it is a scary story. In this volume alone, there are voodoo queens, graveyards—even the dreaded Zombie King himself.

You hold in your hands a very dangerous, very funny record, detailing the hilarious adventures of three boys who have an awesome obsession with monsters. This is the first volume. Read on if you dare. . . . 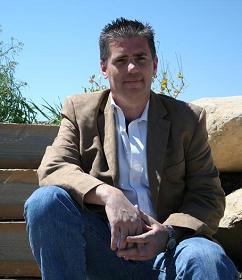 J. Scott Savage is the author of the Farworld fantasy series (Air Keep releasing 02/26/13) and this new Case File 13 series. He also writes The Fourth Nephite series and the Shandra Covington mystery series as Jeffrey S. Savage. In addition,  he has a horror book, Dark Memories, coming out later this month. You can visit his personal blog at www.jscottsavage.com. Or e-mail him at jsavage at jeffreysavage.com. He does school visits, firesides and book clubs.

Standing on the Promises: One More River to Cross by Margaret Blair Young & Darius Aidan Gray 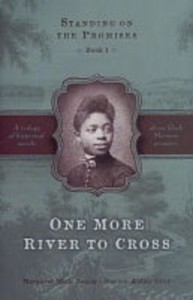 Born into slavery, Elijah Abel was destined to become one of the few Saints of African descent to receive the priesthood before the policy concerning Negroes was in place. In fact, Elijah was ordained to the priesthood by Joseph Smith himself. He served three missions for the Church and remained an active member of the Third Quorum of the Seventy until his death.

Jane Manning James was born free but was still subject to mistreatment at the hands of a white minister in her youth before converting to the Church under miraculous circumstances. It became her privilege to live among prophets. She resided with Joseph and Emma Smith and later with Brigham Young. When she died, Joseph F. Smith delivered a stirring tribute at her funeral.

These and other remarkable stories, until now lost to history, are brought forth in this sweeping saga–Standing on the Promises. From marvelous beginnings, through nearly unendurable hardships, to the bursting forth of more light with the revelation on the priesthood in 1978, the story of African-American Latter-day Saints is deeply affecting, one that will resonate with members of the Church everywhere. 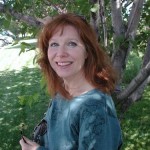 Margaret Blair Young teaches creative writing at Brigham Young University in Provo, Utah. An accomplished author, she has won numerous awards from the Utah Arts Council, including Best Short Story Collection for Elegies and Love Songs (which also captured Best Short Story Collection of the Year from the Association of Mormon Letters); Best Novel of the Year in 1992 for Salvador, and Best Novel of the Year in 1995 for Merry’s Daughters.

She has also written three plays, two of which have been produced at BYU, including Dear Stone and I Am Jane. Margaret also teaches at the Spanish Institute at BYU.

Margaret and her husband, Bruce, a professor of English at BYU, are the parents of four children and live in Provo, Utah. 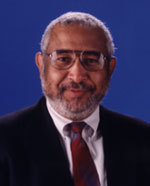 Darius Aidan Gray has a Bachelor of Sciences degree in journalism and mass communication from the University of Utah, and has completed programs with the Graduate School of Journalism at Columbia University sponsored by the Ford Foundation, ABC, and CBS (a professional program equivalent to earning a Master’s Degree without the thesis).

A skilled communicator and writer, he was senior staff reporter and chief photographer at the CBS affiliate in Salt Lake City. He also worked as an assistant to a U.S. Senator on African Affairs. He’s also an independent business consultant, and a small business owner dealing with the automobile after market.

Darius presides over the Genesis Group, an official arm of The Church of Jesus Christ of Latter-day Saints organized in 1971 to support Church members of African descent. His grandfather James Louis Gray was born a slave; his great-grandfather Louis Gray was a slave near Independence, Missouri, and appears in Standing on the Promises: One More River to Cross.