Let’s go with the smaller book publishers first, as in smaller than Deseret Book, Covenant and Cedar Fort. 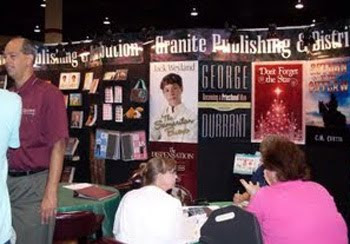 Granite publishes a few titles each year, but they also distribute for a variety of small presses. They had a teensy booth this year. (Click to see last year’s booth) Last year, they had several booth spaces (4? 6?) combined together, lots of author signings, a huge display. This year, they had two booth spaces and there were two authors there signing books when I went by. 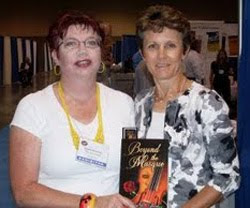 Sandra sent me this photo of her with Granite author, Kae D. Jacobs, and her book, Beyond the Masque. 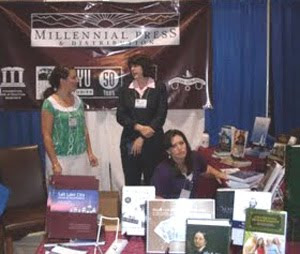 Millennial Press seems to have found their niche in the market. They are solidly doctrinal. They have two great series, Setting the Record Straight, which features various authors on LDS topics, and Know Your Religions, which compares Mormonism to other religions.

In addition to their publications, the also distribute for BYU Studies, which specializes in LDS academic publications. They had several new titles on display at their booth. 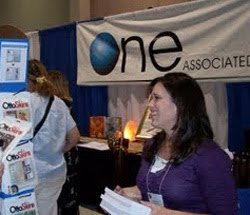 Millennial combined booth space with One Associated, a company that has developed a POS software which helps both vendors and bookstore owners overcome some of the difficulties of doing business in the LDS market. They had a pilot store set up in Pleasant Grove, UT for several months and I’ve heard great things from vendors about how the system works. I have no idea why this hasn’t taken off like crazy. I was very impressed with it when I first heard about it three years ago.

You can just barely see in the corner of that photo a display for OttoSkins, (their website is under construction so this takes you to a twitter page). These are technically sidelines, not books but it’s run by Dave Trammell, who is also one of the owners of One Associated. OttoWear/OttoSkins are thin removeable skins for your electronics—computers, iPods, cell phones. They have an entire LDS line. Totally cool. Wish I had photos of their product to show you. I’m definitely buying some for myself! 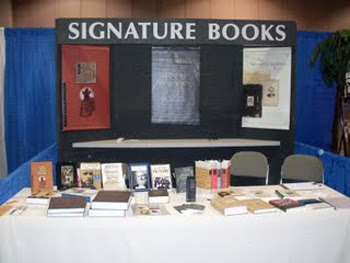 Signature Books had a presence at the convention. They had a small booth, but then they generally do. They “promote the study of Mormonism and related issues pertaining to the Rocky Mountain area.” Their collection definitely speaks to a particular niche of the LDS market, but they do it right because they seem to be growing. 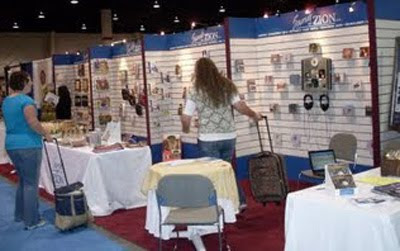 Sounds of Zion seemed about the same size as usual. They are more of a distributor, than a publisher. They’re probably better known for their music and audio CDs, but they carry a decent line of books, as well. They don’t seem to have a focus to what they distribute, but will consider anything that they feel is worthwhile, 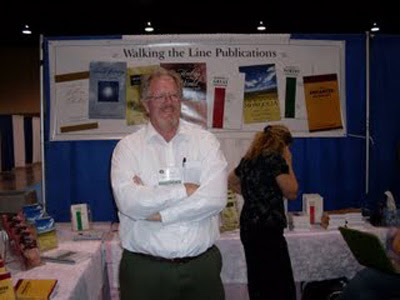 Walking the Line is a self-publishing venture for Kevan Clawson. He’s had a booth there for several years and seems to be about the same as before. His books are doctrinal, missionary, and biographies. 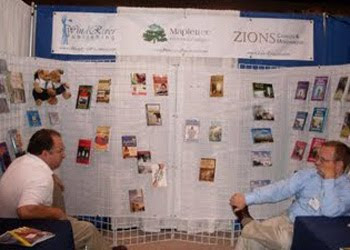 The Wind River booth was smaller than last year, even though they now include Mapletree (Homeschooling & Child Development) and Trumpet Media (Christianity & Religious) as imprints. They carry a wide variety of titles and genres—home schooling, history, politics, fiction, self-help, and more. In this photo, JB Howick (owner) and Ryan Bott (Millennial Press) are discussing solutions to all of the world’s problems.