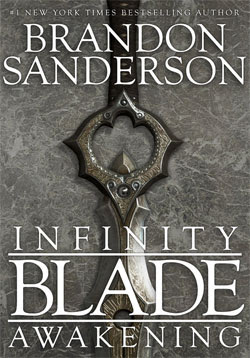 Trained from birth in swordplay and combat, a young knight named Siris has journeyed to the Dark Citadel with a single purpose: fight through the army of Titans to face the tyrannical God King in one-on-one combat. This was his father’s sacred mission, and his father’s before him, going back countless generations in an effort to free their people from enslavement. But when Siris somehow succeeds where all those from his bloodline previously have failed, he finds himself cast into a much larger world, filled with warriors and thieves, ancient feuds and shifting alliances, Deathless immortals and would-be kings. His quest for freedom will take him on an epic journey in search of the mythical figure known as the Worker of Secrets – the one being in the world who can unravel the secrets of the Infinity Blade.

Quoting Sanderson, “It’s intended as a bridge story between the iPhone/iPad game INFINITY BLADE and the sequel to that game, though I did my best to write it in a way that one does not have to have played the game to understand the story. (Though you should totally play the game. It’s heaps of fun.)”